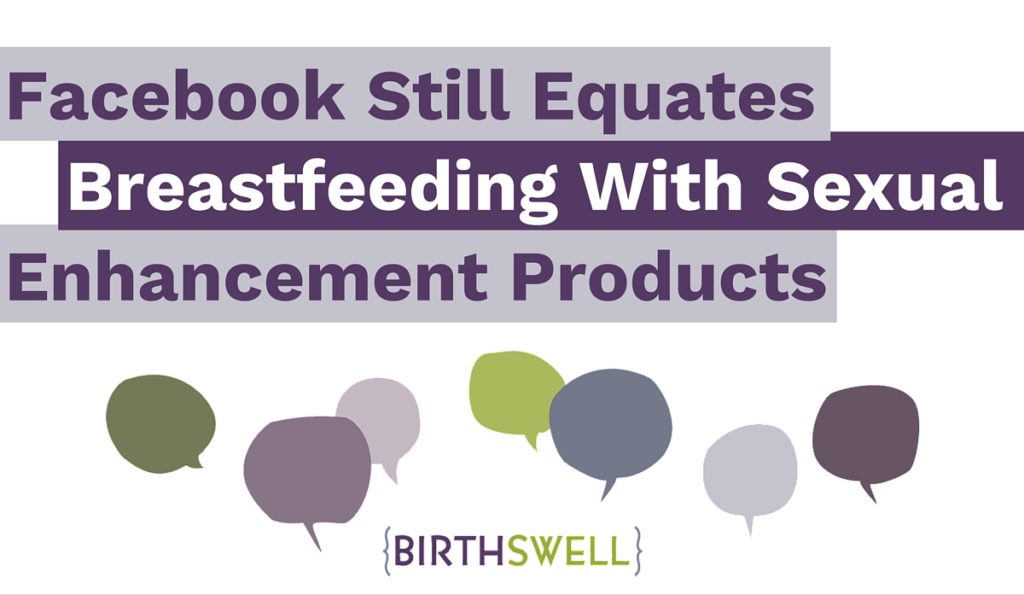 David Stark of BabyBabyOhBaby is a fervent supporter of new mothers. A firm believer that attached mothers and babies promote healthy families, he has developed a series of videos on breastfeeding and infant massage, with one on birth on the way.

With BirthSwell’s support, he recently rolled out a new Facebook page, with the goal of reaching birth and breastfeeding professionals with evidence-based information that can be shared with new and expectant parents. As a part of his content strategy, he launched a series of images promoting high-quality breastfeeding support. As a new page with a small amount of followers, we suggested he consider turning these images into ads:

His goal? Promote quality support in the form of La Leche League or Board Certified Lacation Consultants and build awareness of his company, particularly among breastfeeding professionals. Because his goal was to reach professionals, we targeted the ad to people 22 and older.

Facebook’s response? The ad was rejected, saying it was “advertising adult products or services, including toys, videos, or sexual enhancement products.”

We reached out to Facebook, feeling confident that the ad had been caught by some sort of robot. David had been careful to ensure that the image was within Facebook’s guidelines.

Here’s the response we received from Ralph, a Facebook representative. “Please change the image of your ad or promoted post. I understand it is an image of breast feed [sic] but images like these that appear on users’ newsfeed receive negative feedback. Sorry for the inconvenience.”

As we often talk about in our trainings on Facebook and social media, new and expectant mothers are power users of social media. A full 67 percent of women aged 19 – 29 use Facebook, according to the Pew Research Center. Time online often increases after birth – 44% of US women spend more time online after a new baby is born—and the likelihood that a new mother will seek breastfeeding information and support online is high.

Although BabyBabyOhBaby’s image was allowed to remain online, paid promotions of the ad were not allowed. This is particularly significant given that, without advertising, many posts are only seen by five to ten percent (or less!) of a page’s followers. Companies, nonprofits, and organizations using Facebook to promote healthy messages about breastfeeding simply cannot rely exclusively on organic sharing if they hope to reach the broadest possible audience.

Sadly, we’ve seen similar limitations from other organizations, including an ad designed to reach teen mothers that, in order to be approved, was required to be targetted to 18-and-up audiences only.

Right now, we are reaching out to Facebook in an attempt to get this decision reversed. We’ll keep you up-to-date on what happens next!

We hope that Facebook will reverse its decision and allow this ad, not just for BabyBabyOhBaby, but for all breastfeeding organizations. Facebook, your advertisers don’t think promoting breastfeeding is the same as selling sexual enhancement products!

Update as of 5/3: We have requested that a supervisor review the ad, in hopes that Facebook will reverse their decision. BabyBabyOhBaby has also submitted a second ad (you can see it here) which was also rejected for the same reason. We’ll let you know what happens next.